The Australian men’s sepak takraw team headed over to the annual King’s Cup Sepak Takraw World Championships held in Bangkok, Thailand and this year came home with bronze medals in both the Division 2 men’s Team event and the Division 2 Doubles competitions.

It’s always hard work pulling a team together from around Australia given the distance between all our players and the 2019 team was one of our most diverse yet. Made up of six players from Cairns, two from Darwin, one from Bendigo, and one from Canberra. The boys from Cairns are all Australian-Hmong, and we had three new Australian-Karen players join the team this year which was great to see after our first Australian-Karen player joined last year.

Doubles saw us in a small group with only Bangladesh and Germany. Our boys had the first match of the tournament against Bangladesh, they were quick to settle their nerves and walked away with the win in straight sets. Against Germany it was a different story, we started strongly and claimed the first set with ease. But at the change of ends in the second, Germany controlled the match and maintained it through the third set – defeating Australia 2 sets to 1. Due to Germany losing against Bangladesh in straight sets – we actually topped the group by count back!
That saw us go through to play Singapore in the semis, we played some good points but Singapore proved to be too strong and took the win in straight sets.

We were elevated to Premier Division this year in Regu which saw us come up against Singapore(again!) and Thailand – some of the best in the sport. It was a great experience for our players to test themselves but we weren’t able to get a set off either team, meaning our regu campaign finished in the group stages.

In the group stage of Team event we had some close matches but ultimately triumphed against Iraq, Oman, Sri Lanka, and Bangladesh setting up semi final with Cambodia. Unfortunately for us, Cambodia proved to be too strong and they claimed the position in the final, leaving us to settle for bronze.

A fairly successful 2019 King’s Cup campaign, and great to see all our international takraw family again.

Plenty of photos and further info on our facebook page

The Arafura Games are back!

After an eight year long hiatus the Northern Territory Government of Australia has brought back the Arafura Games. The 2019 event will include 17 sports, one of which we’re stoked to say is Sepak Takraw! The Arafura Games is the highest profile Sepak Takraw event in Australia and since the government announced they were bring the Games back the Australian Sepak Takraw Association has been hard at work to make sure this is one of our biggest events yet.

The Northern Territory Government and the Australian Sepak Takraw Association will host four days of competition from the 1st to 4th of May 2019 held at the Darwin Convention Centre. We will have two courts of competition with both regu and doubles events and as many teams as we could fit into our schedule: ten men’s teams and four women’s teams.

We’re really excited to include women’s events this year because the Australian public haven’t seen high profile international women’s takraw for many years!

This year at the 30th King’s Cup Sepak Takraw World Championships in Bangkok, Thailand the Australian national team won gold! It’s the Australian team’s fifth ever appearance at King’s Cup and this year our team of ten players entered all four events available: hoop, regu, doubles, and team event. Hoop is an open competition, and for Regu, Doubles, and Team Event Australia was placed in Division 2.

We had a fun Regu campaign, and got oh-so-close to taking the gold medal in Doubles too – narrowly losing to the USA in the final, but it was the team event in which we proved our strength! Australia was pitted against Oman, Pakistan, and Chinese Taipei. Chinese Taipei looked to be the favourites and we knew we would be in for a good match! As luck would have it, we came up against them first and as predicted it proved to be a close match! Our first regu lost as they went up against the strongest trio from Chinese Taipei, but then our second and third regus were able to maintain the upper hand and we won the match 2-1!

With a win up our sleeves (or socks!) our confidence was high and we went on to defeat Pakistan 3-0 and have a really fun match against Oman where we won 2-1, and with the win over against Oman we claimed the gold!

It was Australia’s best yet performance at King’s Cup, prior to this year Australia hadn’t won anything higher than bronze medal and this year we walked away with both a silver from Doubles, and the gold from Team Event. Check out the image below for a full re-cap of our results and performance. 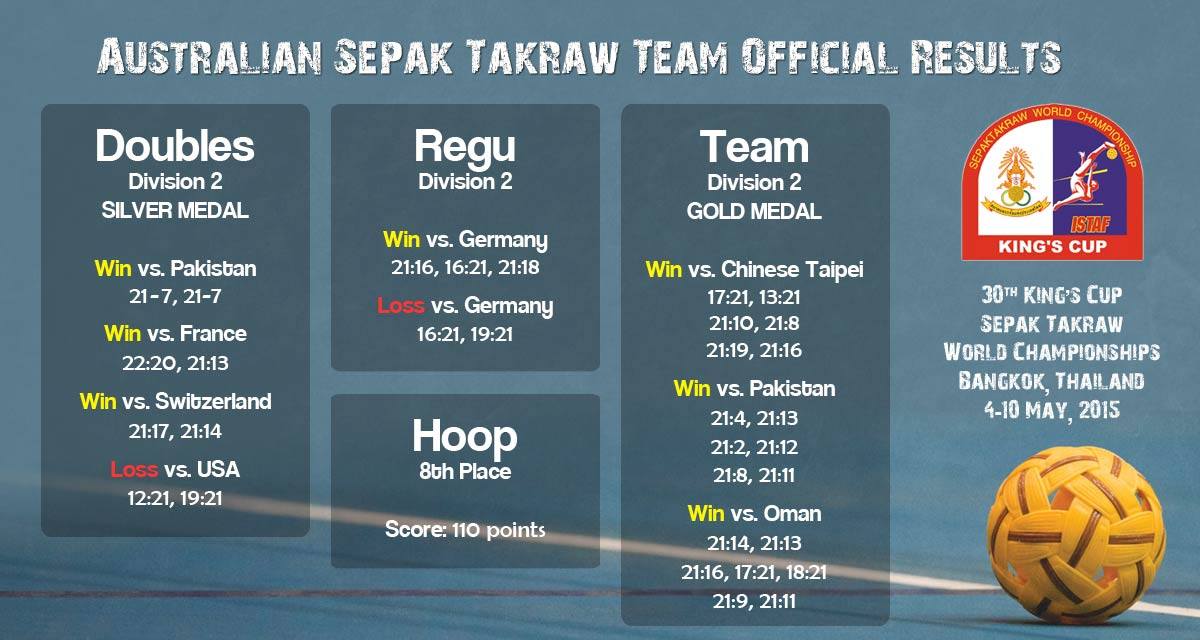 The strong performance in Doubles and Team event mean that next year Australia will most likely be placed in Division 1 against the likes of strong teams such as Laos, Singapore, Philippines, Iran, India, Vietnam. Which is super exciting for Australian Takraw as it means we’ll be fighting it out with countries who have played sepak takraw for years and gives us a new goal to train for and work towards.

We’ve said it repeatedly via Facebook and on Pozible that we are immensely grateful to everyone who supported and donated for us  in order to make this happen, and it’s to the supporters of Australian Sepak Takarw that we dedicate this gold medal!

Additional thanks go to Nike Team Sports Australasia for helping us out with uniforms, and a big thanks to our friends at the Ratchaburi Takraw Club in Thailand for their hospitality and coaching! 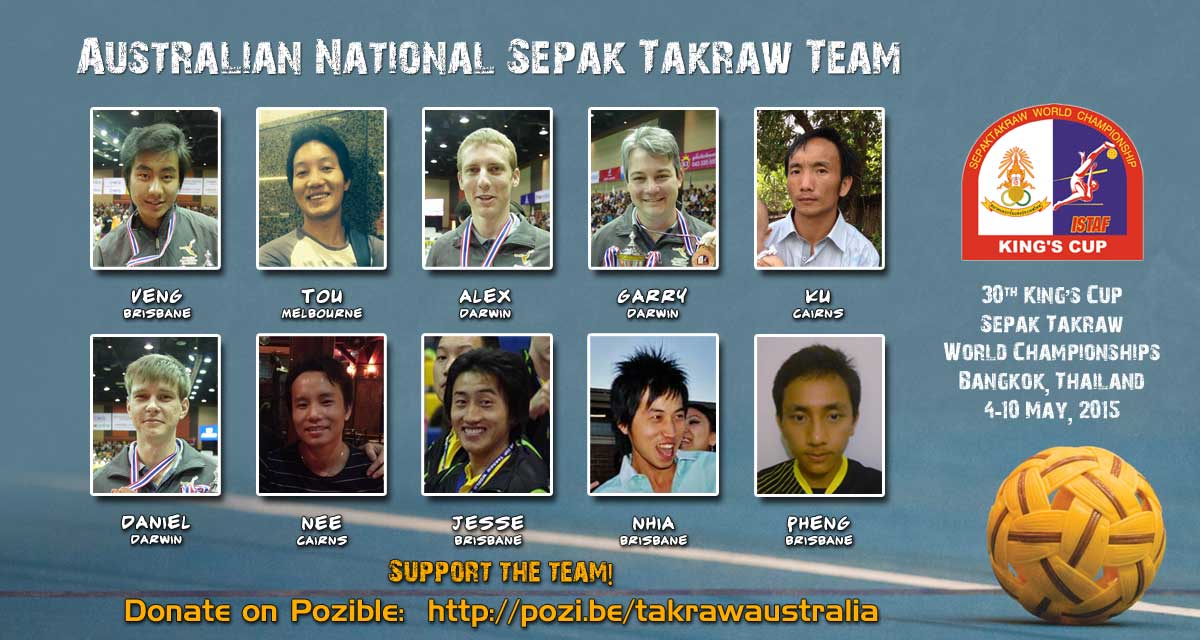 Our old website didn’t display too well on mobiles or tablets so we finally managed to throw together this new one, we’re hoping to bring you more regular updates now that it’s easier to manage! You can still find most of our old posts and pages transferred across to this new one so scroll down and check out some of the older stories.

We’d like to hear any feedback, if you think the design makes for it a bit too tricky to read, or could be improved in a few ways then please do let us know your suggestions.