The Australian Sepak Takraw Association has released it’s plan for the national sepak takraw team in 2015. ASTA is intending to five events in 2015 including:

It’s going to be a big year for sepak takraw, and some of these events will be all-expenses-paid for the players (thanks to the organisers!) so ASTA wants to get more organised when it comes to selecting a team, training our players, and preparing for these events. If you’re an Australian citizen or permanent resident and you are interested in playing for the national team, have a read of the 2015 Plan (attached in pdf form) and send an email to as soon as possible.

Later this month on the 27th of July the FNQ Hmong Youth Society is holding a sepak takraw competition in Cairns. For further details check out the flyer below. Click on it to download a PDF version! 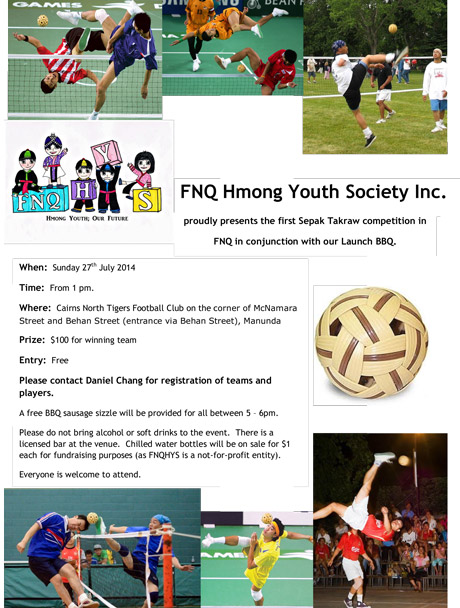 The national team this year features two new players – Tou Moua Yang of Melbourne and Jesse Xiong of Brisbane who will join previous national team representatives Alex Newman and Daniel Ellen-Barwell – both from Darwin. The squad of four will be joined by ASTA Vice-President Jude Ellen. The President of ASTA, Heather D’Antoine is also hoping to join the squad in Thailand.